THE FAME OF THE MANTIS MADE WITH CARE AT THE ONBİRMETREKARE MANTI HOUSE HAS REACHED FROM TURKEY TO INDIA.

Onbirmetrekare Mantı House that gets credit with its different specialties appeals not only its patrons in İstanbul but to all ‘mantı’ lovers (a Turkish dish that resembles tortellini) around the world. Everyone who has eaten mantı in here at least once takes away some for their loved ones, so they can taste mantı too. Diet mantıs prepared with whole wheat and vegetarian mantıs accompany other mantı specials such as Sinop style mantı, Turkmen style mantı, ‘bohça’ mantı with meat. One other thing that makes these mantıs special is their sauce prepared with 21 different spices.

From colorful pasta to mantı
Owner and Chef of the Onbirmetrekare Mantı House Olcay Aydın is among the few people with a strong entrepreneurial spirit that I have known until today. Aydın who is 42 years old has worked at many jobs. He had been in export-import business; he had worked as an art director. Olcay Aydın who highlights that he always had the idea of opening his own place someday in his mind has materialized this dream in the beginning of 2015 successfully. Having felt that the ‘for rent’ sign hanging on a shop window at Acıbadem, Kadıköy was a special sign sent for him, Aydın goes inside immediately and rents the place.

Changed his mind about pasta
When he went home that night, he told his wife that he was going to open the restaurant that he has been dreaming of for years. At the beginning, he was primarily making both pasta and mantı; however, he changed his mind about pasta in a short time and he only began to make mantı. Since the place is only eleven square meters, he decided to call it ‘Onbirmetrekare.’ Aydın who began to work by making fresh pasta says, “I used to prepare delicious pastas in the rainbow colors with carrots, spinach, and beets after working on them for hours. Later, these pastas had a huge demand. When the number of people who ordered these pastas for delivery increased rapidly, I realized that I couldn’t deal with this demand by myself and I canalized on making mantı.”

Team of three makes mantı
Olcay Aydın works at a high pace with care at the Onbirmetrekare Mantı House to make ‘bohça’ mantı with meat, Turkmen mantı with potato, cheese, and walnut, vegetarian mantı, diet mantı, and Sinop style mantı. He hosts the patrons of the place. He prepares the fillings and the pastry himself with care. He has a team of three to assemble them at the end.

The special sauce consists of 21 spices
Aydın who states that they produce 10 kg of mantı daily, 5 kg for serving at the restaurant and 5 kg for filling special orders, says, “Whether served or catered, all our mantıs have the same taste and quality since they are made by the same person. The most significant factor that made the specialties of the Onbirmetrekare Mantı House that popular is the importance given to sustainability. Change of taste is not possible, because we use the same certain recipes for our specialties. Even the spices we use while serving the mantıs are special. This special mixture that consists of 21 different spices from cardamom to cumin and from thyme to red pepper adds a unique taste to our mantıs. We are open from 11 am to 10 pm. From some people’s hands, things taste more delicious. I believe that is true. My father was such a person. I think I’ve inherited this from him. My meatballs and appetizers are also pretty famous.”

Shipped mantı to India
Fans of Olcay Aydın’s mantıs are not only limited to İstanbul. People who taste Aydın’s mantıs take this taste out of Turkey, too. Olcay Aydın made the following comment on the subject: “The people who eat mantı here want their relatives that live out of Turkey to taste them, too. That is why they also order mantı in vacuumed packages. We let the mantı dry in the oven a bit then vacuum. This conserves mantıs for a long time. The mantıs of the Onbirmetrekare Mantı House has been to England, Holland, and even India.”

He is going to open a boutique hotel focusing on design
The next biggest dream of Olcay Aydın is to open a boutique hotel in Ayvalik that is extremely special. Aydın, who can reuse the old refrigerators as kitchen cabinets after few touches and reshaping the old motorcycles into different formats after repairing them, is planning to create a concept where special design products could be displayed. He says he is going to materialize this dream in one year the earliest or in three years the latest. Aydın who states that everyone who stays in this hotel is going to be served specialties made with organic fruits and vegetables says, “This hotel is going to focus on design completely. The pool which our guests would be using to cool during the day is going to be transformed into a different living area in the evenings by covering its top.”

SİNOP STYLE MANTI RECIPE FROM CHEF OLCAY AYDIN
Ingredients: For the dough: 3 cups of flour, 1 cup of water, 2 eggs, and salt. For the filling: 1 kg of ground beef, 4 onions, black pepper and salt.
Directions: After kneading the dough well, let it rest for 3 hours. Prepare the filling. Roll the dough thin and place a bit of the filling in the middle then turn it over. Add plenty of water into a deep pot and when it becomes hot add 1 dessertspoon of salt. Bring it to a boil. Add the mantıs. They become boiled in 7-8 minutes. As they are boiling, add butter and oil into a separate pan. Add the special mixture made with 21 spices. Drain 200 grams of mantı as a portion and place it into a casserole dish. Mix yogurt with crushed garlic and spread over mantıs. Add the butter, spice mixture on top, and grind walnuts on top generously.

WE CANNOT SEPARATE THE GOOD AND BAD FOOD

THE MEETING POINT OF THE EXTRAORDINARY FLAVORS 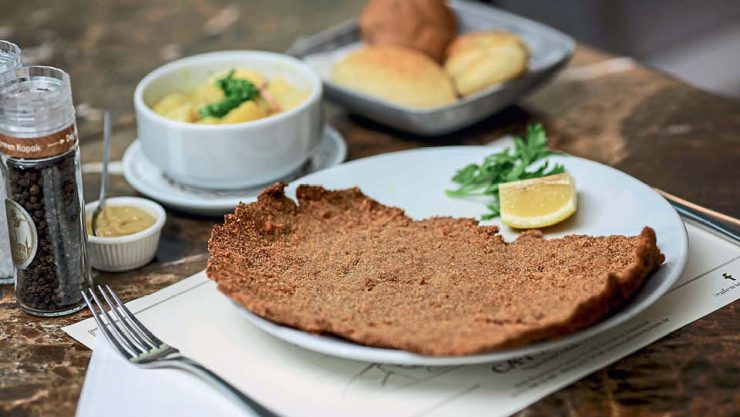 THE CORRECT ADDRESS OF ‘VEAL SCHNITZEL’

THEY ADDED FLAVOR TO THE PİŞİ CONCEPT