Tuluyhan Uğurlu takes place among the most significant artists who were raised in our country. His success has already been discovered abroad; however, he has drawn attention first with his composition of İstanbul Kanatlarımın Altında’s theme music (İstanbul Beneath My Wings is a 1996 Turkish film.)

Later, he advanced in his career as the name who had our country fall in love with the piano all over again. We talked about his life as an artist with Tuluyhan Uğurlu, who has given concerts at important locations and who has achieved to have his compositions embraced by our society as the way our folk song are.

Shall we learn more about the unknowns of Tuluyhan Uğurlu with your own words?

He is an ordinary man… He lives as the way everybody else does… He is always among people except the concert days. You can see Tuluyhan sometimes at a high class cafe or at an ordinary diner or at a bank making a deposit to pay for the bills. He is an Anatolian artist, who meets people there and start chatting to widen his knowledge, who likes to travel in İstanbul by metro, who drives large vehicles, who knows all the details of the old American cars, who doesn’t hesitate expressing himself when it is a matter of our nation and Anatolia, whose eyes get teary hearing the first notes of the National Anthem, who goes to Sultanahmet to listen to the beautiful azan, who embraces all cultures living in this land, who is passionately in love with Hagia Sophia, who adores and respects Bach, Mimar Sinan, and Itri, who adopts the life philosophy of Mustafa Kemal Atatürk, who has the last word when it comes to Atatürk…

You are the child of a musician mother and a poet father; how did your journey in arts begin and what was your family’s part in this?

Our brains are like sponges that absorb everything, especially during childhood. Being born to a family that lived intertwined with arts, meeting with my mother’s piano at a very young age made me aim towards music no matter what. I was told that my IQ was a bit higher than my peers. I would have developed myself in another field if there was not a piano at home. My mother’s musical culture and passion for it, my father’s poet side, their house guests, who were also artists, contributed to the development of Tuluyhan whom you know today. Sometimes I begin to discuss in an area that I never thought that I knew anything about it, surprising even myself. I think this is because I had listened to their chats with all my heart that I have been combining those with my own knowledge now. Our brains are like sponges that observe everything, especially during childhood.

You won a Wonder Children Scholarship in your senior year in İstanbul Municipal Conservatory of Music and you happened to go to Vienna. Can you tell us about those years?

I had been accepted to the conservatory of music when I was 4. I don’t remember my first years well. You continuously learn the musical notes and play the piano. I entered the exam for the wonder children scholarship when I was 7 and passed; however, Turkey was in economic crisis and the state couldn’t afford to send me to study music abroad. My late mother was a very clever woman. She froze my scholarship and waited for me to complete my high school and conservatory educations. When I was in my senior year of the conservatory, I went to Vienna with my father. I entered the exams of Vienna Academy of Music. I was accepted to piano and composition department. My father left me there and went back. My years as a student in Vienna therefore began. I spent 14 years in Vienna to get my bachelor and master’s degrees.

When your friends were struggling with playing Chopin your concert posters were hanging at the Vienna streets. What made you different?

You study and play the classic composers at the academy. The goal there is to educate you as a good artist/performer of Classic Western Music. I did not want to settle with it. My head was filled with my own music. I desired to voice it. I was continuously composing music then. I felt respect for the great composers, I still do, but I wanted to follow my own path. I began to give concerts in Vienna at different locations. My own music was getting attention. I kept following the path.

After a while you completely aim for composing music. What were the thoughts and feelings that made you make that decision?

I was playing classic compositions in the first part of my concerts, later I was playing my own. But believe me when I say this, my own compositions were getting more applause from the audiences. Because no one can play Chopin better than Chopin. Same goes for Bach and Mozart. Recording music was not invented in their age, so we do not know how Mozart would play his own compositions. We only honor some musicians as a good Mozart performers. Looking at the notes and playing the piece don’t reflect the spirit of it. So I began to play my own works with this thought in mind. I became successful.

You are a worldwide known artist. What is the secret to being universal in arts?

It begins with being local at first. You must also listen to the sound of the universe. If you are able to receive the messages of the universe and add those to your music than no matter where in the world you play it, everyone will perceive you. Music is the most abstract one among the branches of arts. You cannot see it or hold it in your hands. If your music is coming from the heart, the whole universe will listen to it.

You have turned a new page in music by using piano with the the native instruments. How do you capture the harmony of these tunes together?

I do not make a special effort for this. I don’t worry which tunes might be popular and where in the world. The native instruments are included in my music because I simply like them. Then the journey begins. There are mathematical differences between our music and the Western music. My vote always goes to our music at this point. I do not change the original; for instance, I play in accord with the mehter in my mehter-piano concerts and the piano accompanies the mehter. I wouldn’t attempt to synthesis that would not be in harmony. It would have been called a cacophony then. A journalist had described my music as ‘a seamless synthesis’ once. I would like to make a finishing touch to his description by calling my music ‘İznik Tile’. Mosaic consists of pieces; however, tile is whole. It unites all beauties in a vase or on a wall. Pieces unite through arts and become a whole. Each instrument represents a culture. Underestimating an instrument means to ignore or terminate its culture. This is a fascist idea, which would not suit the Anatolian people. I don’t know, was I able to clearly explain my thought?

You draw attention to the concerts you give in historical places. Is this a choice? If so, what are your feelings when you’re playing at such places?

I like to give concerts in historical places. I believe that people in the 21st century are now bored of concert halls. Giving a concert at a historic venue is difficult for us – you turn an empty space into a concert hall – and for the audience. For example, let’s say I am giving a concert at the Grand Bazaar. We line chairs row by row on hundreds of years old stones, perhaps the chair you sit happened to be placed on a slanted surface. Let’s pretend a concert at the Sirkeci Terminal. Voices of the crowd, ferry whistles, and traffic sounds are coming from the outside. However, despite these troubles, people are caught up in the charm of space. The historical places have a different kind of energy, which is exciting, new, extraordinary for both the artist and the audiences.

The concert you gave at the opening of Akdamar Church is one of the unforgettable ones. What is your favorite concert?

My Akdamar Church concert is among the memorable. The arrival of the piano to the island on a raft, its climb to the hill, then playing in the crowd on that important day… My Mount Nemrut concert is at the forefront of memorable ones. The concert I gave at Kocatepe, where the Battle of Dumlupınar was fought, is also unforgettable. The concerts of the 550th anniversary of the Grand Bazaar and the Çimenlik Castle are artistic events full of beautiful memories.

In which projects and where will we see you in the coming days?

This year there are celebrations of the 100th anniversary of the War of Independence. As usual, I am not in the official programs, but there will be a concert tour called “On the Anatolian Road with Atatürk”. Already a deal was made with many cities. We are in contact with official authorities for a study intended for high schools for the coming years. I will give many concerts abroad for promoting Turkey’s tourism. The concerts that I have given with great passion at terminals will continue.

With the support you provide, you are surrounded by young talents. What kind of musicians will we listen to in the future?

In the future, I believe that free-spirited young people will make their own music. I see very talented young people in high schools of fine arts. I’m hopeful for Turkey as usual.

Today, you’re an idol of many young people. So, what do you recommend to young people who want to walk on this road and be like you?

I always tell them that I’m currently doing music with no course. My job was very difficult. In front of young people now there is an example like Tuluyhan Uğurlu. Let them do their own music, think free. They should work hard and most importantly learn the old without underestimating it and sail towards innovation in their own words. 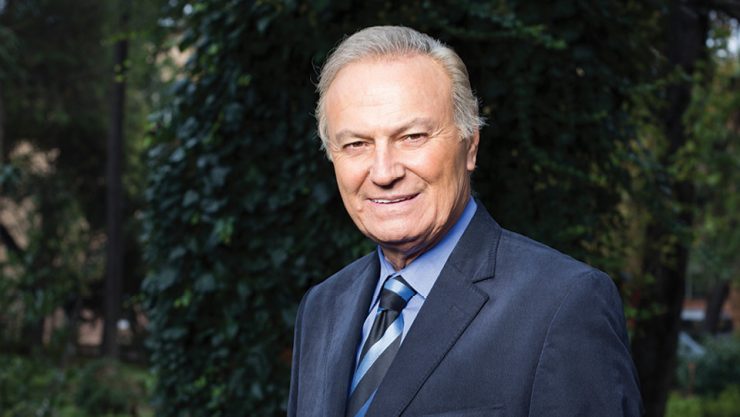 THE ROMANTIC ACTOR OF THE TURKISH CINEMA: EDİZ HUN

THE GREATEST TENOR OF ALL TIMES: JOSE CARRERAS

HE USED TO BE A MEN’S TAILOR, NOW HE IS A HIJAB CLOTHING DESIGNER

MAKES THE WAY FOR THE YOUNG WITH ENBE ORCHESTRA