Anatolia reflects its archaeological wealth to its museums successfully and effectively. Whichever region you go to, even if the excavation sites are not open to visitors, you will see a rich representation of the history in museums.

The periods when important relics were taken abroad or smuggled are far behind. Today, numerous doors open to history from Turkey’s most famous museums to the most humble. In addition, the artifacts remain in the region where they belong, instead of being taken away from their land to be exhibited in museums in big cities. It is no longer surprising that there is a museum worth seeing even in the smallest settlement in Anatolia. Some of these museums are award-winning and famous in Turkey and even in the world, with their architecture, exhibition styles, and collections. For this reason, we focused on ‘small museums’ at this time.

Amasra Museum
Fatih Sultan Mehmet said for Amasra when he saw it for the first time from a high hill: “Lala, is this the apple of the world’s eye?” He included Amasra into his empire’s territory and established the first naval school here in the Black Sea. That building is the Amasra Museum in Little Harbor (Küçük Liman) today. Everything in the vicinity of Amasra and belonging to the ancient city of Amastris is displayed in a very elegant way in this museum. The museum of Amasra, a district of Bartın, is also the only archaeological museum of the Western Black Sea.  Important artifacts dating from the Byzantine Empire to the Ottoman Empire are exhibited in the museum, including the statue of Hadryanus, representing the glorious return of Athena, the god of war, from a war on wolf back. This female wolf, having nursed the brothers Romus and Romulus who supposedly founded Rome, is one of the points that attract the attention of visitors. The museum also features a depiction of the snake representing the god of medicine Asklepios.

The tomb of Galip Dede, one of the dervishes of the 17th century, and the Galata Mevlevi House (Galata Mevlevihanesi), which has housed music and science throughout its history… The members of this dervish house were the disciples of Mevlana Celaleddin Rumi. Galata Mevlevihanesi, or in other words Kulekapı Mevlevihanesi, located in Beyoğlu district of İstanbul, was built in 1491 on the grounds of a hunting mansion belonging to İskender Pasha, the governor of Sultan Beyazid the II. The first sheik of the Mevlevihane was Mehmed Semâ-i Çelebi. It was rebuilt after the time of Mustafa the III (1766). During the period between the second half of the 1500s and the early 1600s, the Mevlevihane was used as a monastery and classrooms of the Halveti order. Built in the form of a complex and opened to tourism in 1975, the main structure of the Mevlevihane consists of sema house and dervish rooms. There are also Halet Efendi Library, Fountain and Mausoleum, Sheikh Galib Mausoleum, Hasan Aga Fountain, cistern, cemetery, Adile Sultan Şadırvanı, and laundry facilities. This small museum, where Sufi music instruments and dervish supplies are on display, gives an interesting perspective about Mevlevism. The whirling dervishes show that is performed throughout the year is viewed by large crowds of local and foreign visitors each time.

“I was present at almost all of their births. There are so many pieces that when they were found during the excavation, my eyes filled with tears…” said for the pieces in the museum, the explorer of Aphrodisias, Kenan Erim, who is passionate about the place. Aion’s profile representing eternity, the transparent skin of Apollo, Aphrodite, who dries her hair while sitting on a seashell, the reality of the battle in the Trojan War… The sculptures carved out of milk-white, blue and transparent marble blocks in the museum of the ancient city of Aphrodisias make the eyes of even those who visit here for the first time filled with tears. The magnificent sarcophaguses, with garland chains and theater masks, scattered around the garden of the museum are just a glimpse into the grandeur of the museum.The museum exhibits early, middle and late Bronze Age artifacts, Lydian ceramics found in mounds and around Aphrodite Temple, archaic, classical, Hellenistic artifacts, Roman, Byzantine and Early Islamic works. The fact that the city had such an important place in arts, the protagonists were, of course, the sculptors trained by the Aphrodisias School of Sculpting, which operated from the late Hellenistic period in the 1st century AD until the Early Byzantine period in the 5th century BC. However, the reason why Aphrodisias progressed so much in the field of sculpting is the marble quarry near the city and the quality and abundant marble mined from it. This made Aphrodisias the center of an unprecedented sculpting school in the ancient world for 600 years.

Edirne Health Museum
It is a living museum and the winner of the European Parliament 2004 European Museum Award. Ambitious, surprising, stimulating imagination, informative, appealing to senses and qualified. The most prominent part of the museum is that the subject is treated in its actual place, in a historic 500-year-old hospital. At first, all kinds of patients were admitted to the Sultan Bayezid the II Complex’ hospital section. After years passed, the hospital became a center where mentally ill patients were treated. In addition to the medical methods of the period, music, water sounds and fragrances were used for treatment. The concerts given by the group of 10 singers and instrument players, which is animated with mannequins today, used to be heard without echoing all over the building thanks to the perfect acoustics of the place.With these features, the hospital reflects an extremely advanced understanding of medicine in that period. The hospital had a polyclinic, inpatient care, musical treatment for mentally ill patients, and special rooms for clinically insane patients without a cure. The treatment was free of charge and free medication was distributed to the patients in the city twice a week. The rooms and the patients who are portrayed through mannequins are specified in detail such as chronic psychosis patient, occupational treatment room, epileptic doctor, and nurse… The most remarkable of them is the lovesick patients’ room; a melancholic lovesick patient and an insane patient are animated here.

Amasya Museum
The museum of Amasya, which is a central Black Sea city and one of the oldest settlements in Anatolia, is among Turkey’s catchiest museums with both mummy collection and presentations. Founded in 1925, the museum consists of archaeological and ethnographic sections, a total of 26 thousand works. The most interesting part of the museum, which was moved to Gökmedrese Mosque belonging to the Seljuk period in 1962, is the Tomb of Sultan Mesut I in Narlıbahçe Cemetery. Unlike other examples in the world in terms of embalming technique, the bodies were mummified without removing the internal organs. İlhanlı ruler of the 14th century Anatolian Minister Prince Cumudar, Emir of Amasya İşbuğa Noyin, İzzeddin Mehmed Pervane Bey, his wife, his sons, and his daughters are among the people who were mummified by this technique. One of the elaborate aspects of the museum is the display of the works of 13 different civilizations in Amasya in chronological order and especially enlarged photographs of coins and jewelry. The entrance floor of the museum exhibits bronze and terracotta sarcophaguses from the Roman period, amphora found in shipwrecks in Bafra, Amasya coins, Roman period jewelry, Early Bronze Age objects, Middle Bronze Age seals, rhytons, spearheads, and libation vessels. In the ethnography section located on the upper floor, you can see the bronze statue of Theispas, the first and only Hittite Storm God of the archeology world.

The Journal of Blue

The Firsts From Anatolia That Made History 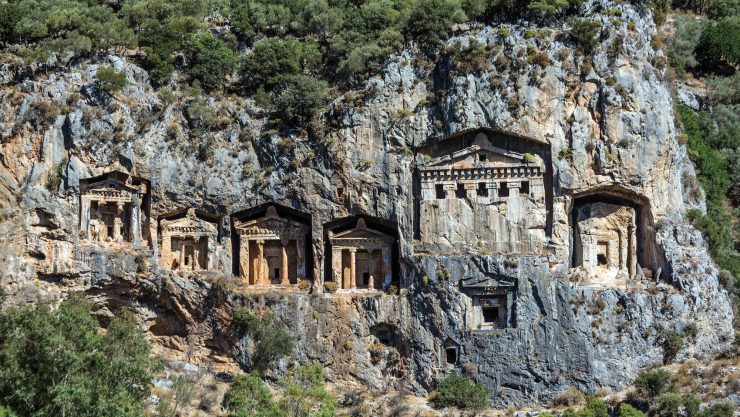 A City Favored By Nature: Kaunos

Loyalty to The Relics