It was a trip to Paris… I told my friends that I wanted to see Père Lachaise Cemetery. I knew that the people who had made the history were buried there, besides there were impressive tombstones.

Despite my friends’ rejections, I have walked around the cemetery as if I was walking around a historical place. Cemeteries may not be at the top of a must-see list without a doubt; however, their architecture, design, and stories open the doors to a totally different history and culture. Some cemeteries have reached today from the depths of history and they have a lot to tell.

On the Tiber, this massive castle, with an original architecture, is instantly noticed by its unique shape. After the death of the emperor, the ashes of the Roman Emperor Hadrianus were placed with his wife and son in this castle, which was designed as a  mausoleum for him and his family. Some of the emperors who came after him liked the mausoleum and wanted to be placed there after their deaths, but this tradition ended when the building was turned into a papal fortress in the 6th century. The castle-mausoleum is now a museum named Museo Nazionale di Castel Sant’Angelo. The eclectic collection here features paintings, sculptures, military memorabilia and medieval firearms. On the upper floors of the castle, there are fascinating places reflecting the Renaissance period, including the magnificent Sala Paolina, which is covered with frescoes depicting sections of the life of Alexander the Great. Two floors up, there is the legendary terrace that Puccini immortalized in the Tosca opera. The terrace of the castle, which was once the city’s tallest building, is one of the hippest places in Rome with its magnificent views.

The Terracotta Army, which is one of the world’s most famous archaeological finds, is also an important touristic area that announces Xī’ān’s name to the world. This underground army, composed of thousands of soldier sculptures, protects the spirit of the First Chinese Emperor, Qin Shi Huang. We wouldn’t be exaggerating if we told that this was  the most crowded tomb in the world. There are more than 8 thousand soldiers, 520 horses, 150 cavalry horses and 130 chariots. They were either protecting the emperor from the corrupt spirits awaiting him in the afterlife or as many archaeologists believe, the emperor believed that his domination over the throne would continue in the afterlife. The guardians of the tomb, estimated to belong to 246-208 B.C., provide us with important information about ancient China. The discovery of the army made from terra-cotta was a complete coincidence. In 1974, villagers who were drilling for a well discovered the thousands of terracotta soldiers and an underground scene depicting them in the battle. Over the years, although this area has gained a great reputation, many extraordinary features remain hidden. For example, none of the soldiers look alike.

The Pyramid of Cheops

“How was it built and why?” Perhaps the Egyptian Pyramids of Giza, still standing up today as a praise awakening admiration for the power and success of ancient Egypt, are among the most common structures to be the addressee of this question. The last remaining wonders of the ancient world, for almost 4 thousand years, with their extraordinary shape, perfect geometry and dazzling dimensions make anyone who approaches them to ask this question. Hundreds of researches have given partial answers to this; it is certain that they are built by teams of tens of thousands of workers as massive tombs on the orders of the pharaohs. The Pyramid of Cheops is originally a memorial tomb built in memory of Pharaoh Khufu. When Khufu’s Great Pyramid was completed in 2570 B.C., it reached a height of 146 meters. Until about 4,000 years after its construction, the world’s highest structure kept this record. Passing centuries and weather conditions caused a nine-meter reduction in its altitude. There’s not much to see in the pyramid, but if you’re not claustrophobic, the climbing experience inside the pyramid is unforgettable. With its magnificence and mystery, Khufu’s Great Pyramid is the oldest and the only standing structure of the seven wonders of the ancient world. 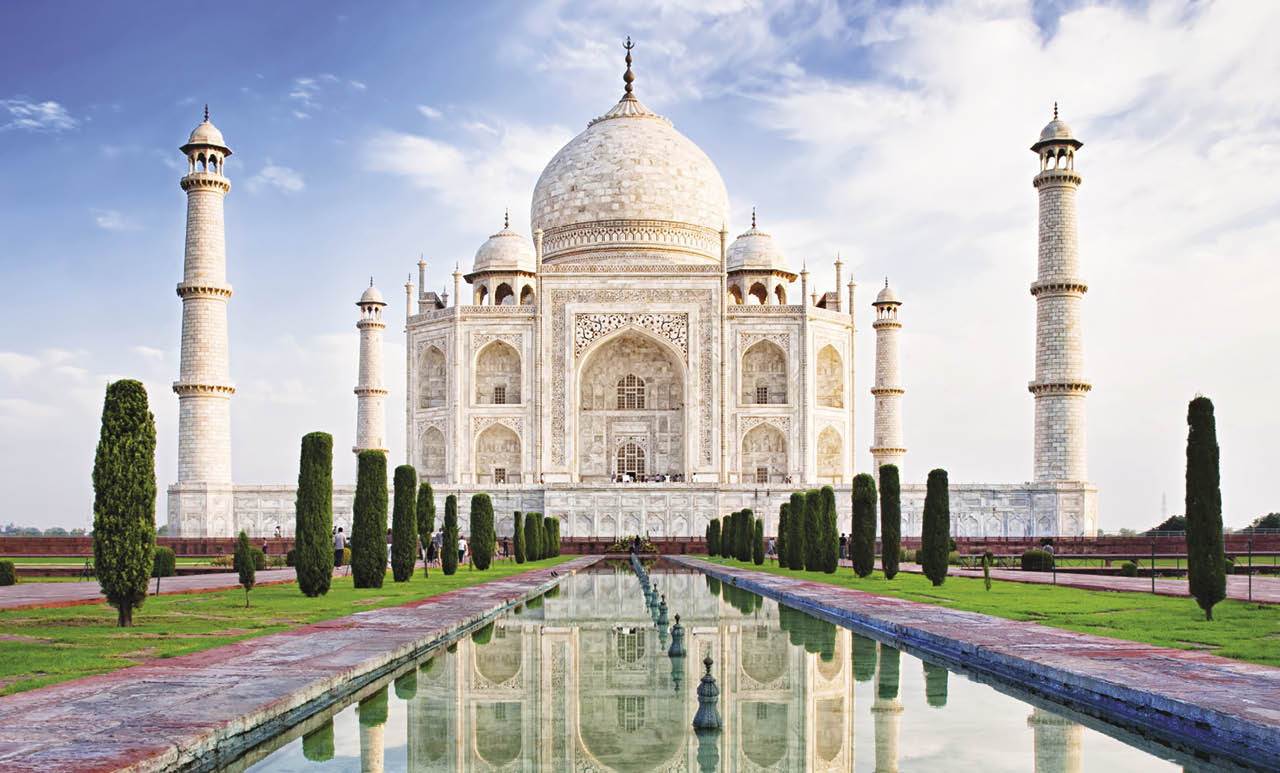 When the subject is monumental tombs, not mentioning the Taj Mahal, a magnificent monument of love, is impossible. As one of the most famous icons in the world, the Taj Mahal, on the banks of the Yamuna River, is a stately, white marble mausoleum.  Included in the Unesco’s World Heritage list, the construction of the mausoleum lasted for 22 years between 1632-1654. The Mughal ruler Shah Jahan had the structure built in memory of his wife Mumtaz Mahal, who died prematurely. Perhaps one of the most exaggerated works built for love and built in the empire’s capital city of Agra at that time, the Taj Mahal dazzles with precious stones under the first lights of the morning and has stories of romance and courage in every square meter of it. The most striking feature of the tomb is the 35-meter marble dome on the tomb, the symbol of elegance. The Agra Castle, where the room, where Shah Jahan watched the Taj Mahal from his window until his death in his last days imprisoned by his eldest son, is located, is also worth seeing.

In the middle of the Gümüşlük Neighborhood at the foot of the Hıdırlık Hill overlooking Milas Plain, it is truly amazing to find such a striking tomb in a park where children play. The Gümüşkesen Mauseloum was inspired by the Halicarnassus (Bodrum) Mausoleum, one of the seven wonders of the world in ancient times. The mausoleum, positioned at the most breathtaking point of the ancient necropolis of Milas, almost resembles a miniature of it. It is presumed that the tomb belongs to a person, who served the city or was an important state administrator. The structure was built in the middle of the 2nd century when the Roman rule was in power. The marbles used in the construction of the mausoleum with a magnificent masonry are from gray-veined marble quarried at Sandras Mountain. The most impressive two architectural elements in the monument are the rectangular burial chamber and the pyramid-like roof the columns carry. The roof, decorated with plant and geometric motifs, is an indication of how advanced the marble workmanship of the time was. Although it did not survive until today, it is thought that there used to be a large statue on top of the monument, representing the grave owner and his family.

FOR THOSE IN PURSUIT OF NEW EXPERIENCES…

A TRIP TO THE FRENCH RIVIERA

How Much Do You Trust Yourself?

Nature is The Sole Direction: Ecotourism

THE THREE MUSKETEERS OF UZBEKISTAN: SAMARKAND, BUKHARA AND HIVE

4 Small Touches to Your Decoration

Chasing After Water Towards Civilization: Rivers